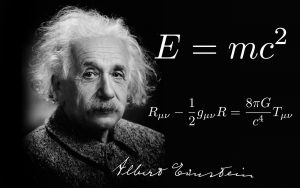 Albert Einstein heard all these phrases about himself and more. Growing up was tough for young Einstein. He didn’t express himself well and he struggled in school. Even his teachers gave up on him, deciding that he was impossible to teach. Those around him considered him mentally retarded, and no one thought he would ever make anything of himself.

This doesn’t sound like an auspicious beginning for someone who is considered to be one of the greatest geniuses of all time, does it?

Einstein seemed to meet failure at every turn. He wished to attend the Swiss Federal Institute of Technology but had to take the entrance exam twice before he was admitted. Even then, his troubles weren’t over. His teachers laughed at his ideas, calling his doctoral dissertation “irrelevant and fanciful.” After college, no one thought much about him. He worked in a patent office. A situation which turned out to be perfect because the work was so mindless giving him plenty of time to think.

And think he did. A lot!

Albert Einstein used his extra time to work out several theories. In fact, he became so caught up in his ideas, he grew absent-minded and oblivious to the world around him. In the grand scheme of things, maybe it didn’t matter quite so much whether he forgot to wear socks with his shoes. The important thing was what he developed, what he created in those deep thoughts. From the Theory of Relativity to every one his subsequent theories, it soon became evident that Albert Einstein’s thoughts were considerable. So much so that he became a professor himself, and even won the Nobel Prize in Physics in 1921.

Imagine what his critics had to say about him then!

From Albert Einstein, we should learn not to let the world define us. No one truly knows what you’re capable of but you. Even if you don’t always express your ideas well, it doesn’t mean those ideas don’t have merit.

Albert Einstein is also an excellent example of what it means to do your own thing. His ideas didn’t mesh with the way people typically thought about the world. Even in his lifetime, not everyone saw things his way. This didn’t stop him from expressing himself and standing by what he said.

So be smart like Einstein. Don’t be afraid to share your ideas with the world. More importantly, never let anyone else tell you what you can do. That’s for you to show them.